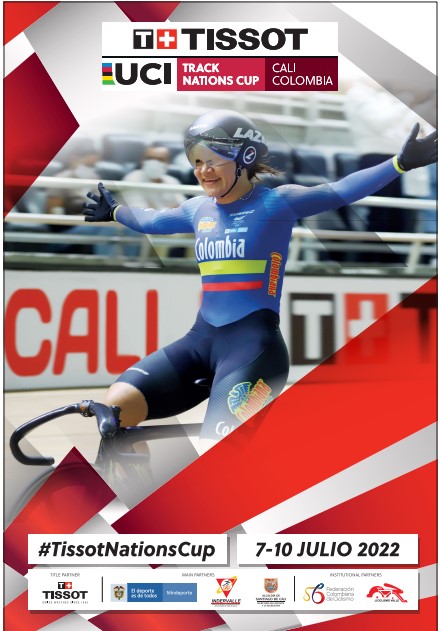 The Organization of the UCI TISSOT Cali 2022 Cup of Nations, presented today to the Media, the official poster of the event, in which a great tribute is paid to the Colombian cyclist Martha Bayona, today the most important track player in the country and a of the best internationally.

Bayona, who this year has achieved important results in the Nations Cup, has 8 gold medals on her account, achieved from the 2016 Cup to the two valid ones completed in 2022 in Glasgow (Scotland) and Milton (Canada).

The poster was unveiled in the middle of the work meeting scheduled by the general management with the area coordinators and the manager of Indervalle Carlos Felipe López. Each one of them presented the tasks that have been carried out in the days prior to the event, which left the directors headed by Mr. Hernando Zuluaga very satisfied.

Martha Bayona Pineda was born in Bucaramanga and after winning all the titles she played at the national level, she made the international leap in World Cups (today the Nations Cup), Bolivarian, Central American and Caribbean, South American and Pan American Games.

Her first medals in World Cups were achieved in the 2016/2017 edition in Cali and Los Angeles where she won two silver medals in Keirin. That same year she also in Keirin she got silver at the World Track Championships in Hong Kong.

This season, of the eight podiums achieved by Colombia in the Nations Cup, Martha Bayona rose to four to claim; one gold (500 meters), one silver (Keirin) and two bronze (speed in both).

Today, Martha Bayona is the first track player in Colombia and head of the team that represents the country in international events. Due to her results, her presence in the UCI TISSOT Cali Nations Cup promises to be one of the great expectations of the Cali public, which this time returns to the stands of the Alcides Nieto Patiño velodrome.

Let us remember that the previous year, the Colombian finished consecrated as the great figure of the Cup by winning four gold medals.

Previous Post
The Operating Committee reviewed advances in the organizational process of the Cup of Nations
Next Post
New Zealand, destination Paris, with a stopover in Cali.