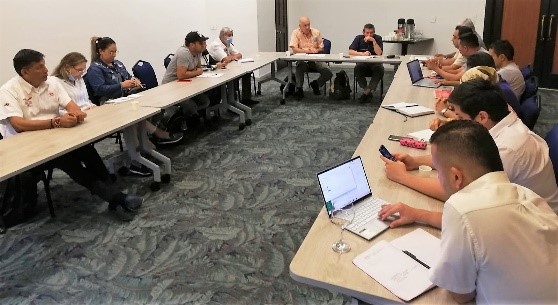 Those responsible for each area presented their report to the general management.

Very productive was the meeting of the Operational Committee of the UCI TISSOT Cali 2023 Cup of Nations, convened by the general management, headed by Mr. Hernando Zuluaga. It was attended by the 16 area coordinators who were in charge of presenting the organizational progress of the event.

In the absence of 41 days for the contest, the work schedules and the planning of activities are carried out to the letter and are going according to what is established, thanks to the great experience acquired by this work team in World Cups and of Nations and at the 2014 World Championship.

No issue was left unaddressed, there is no room for improvisation and each area coordinator is aware of what has been resolved so far and the issues that must be resolved in the short and medium term, depending on the proximity of the event.

Mr. Hernando Zuluaga Aristizábal listened carefully to each of the presentations and took note of the organizational news. The coordinators who presented their report were:

Each of the areas is dedicated for now to implementing each of its operations with its work teams, little by little the Cup is approaching and the cycling atmosphere in the city grows as the return of the public to the stands is announced, one of the great incentives for the participants who receive each version of the contest, all the affection of the people of Cali.

In the two valid races held so far in Glasgow (Scotland) and Milton (Canada), cyclists from 48 countries and 16 professional teams have competed in the competition programs. In Cali the first day of the race will have four finals, the Team Pursuit and the Team Speed, in both branches.