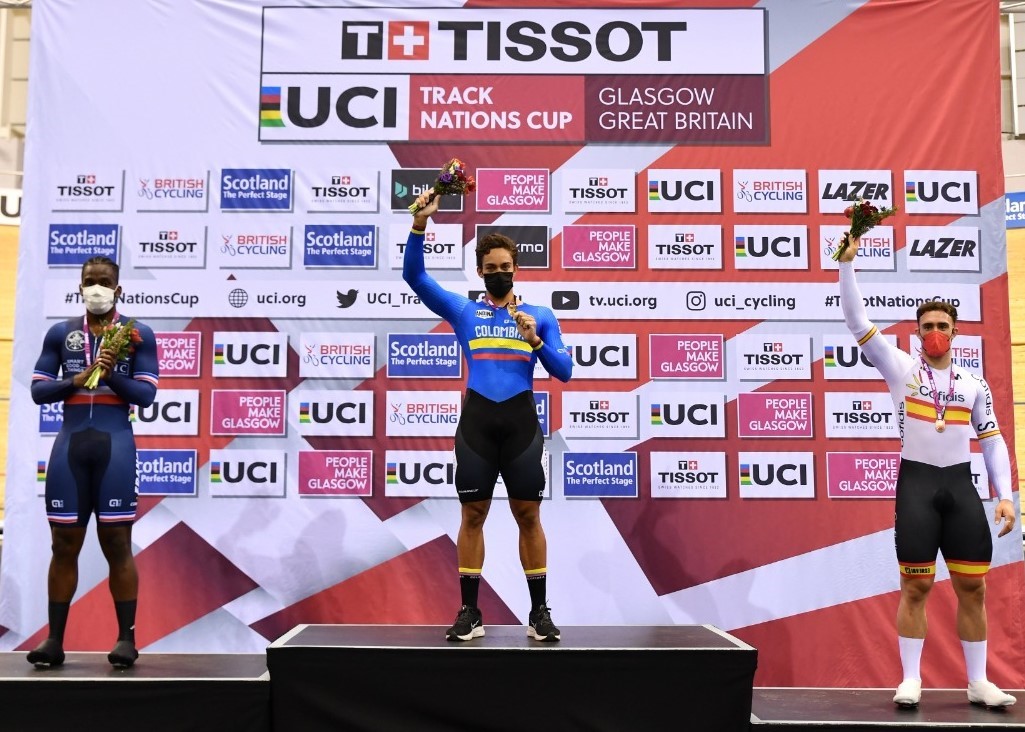 A great performance was achieved by Colombian track cycling at the close of the first round of the 2022 UCI TISSOT Nations Cup, which was held at the Chris Hoy velodrome in Glasgow (Scotland). valid that will last until Sunday, April 24.

The great protagonist of the Colombian delegation was the Santanderean cyclist Martha Bayona who climbed the podium three times, to claim a medal for each metal. The first medal won by the Colombian, was achieved in the individual speed test, in the hits for the bronze she surpassed the Ukrainian Olena Starikova, who made a difference by winning in the two outings to the track. Gold went to Ketsey Mitchell of Canada and silver to Laurine Van Riessen of the Netherlands.

His second arrival on the podium represented him climbing to the top of the podium. Bayona kept the gold medal in the 500 meters by stopping the stopwatches in 33 seconds 473 thousandths, beating the Italian Miriam Vece by 378 thousandths and Kyra Lamberink of the Netherlands by 400 thousandths.

And to finish her collection of metals, she was missing the silver medal, the one she won in the Keirin, in which she was surpassed by the French Mathilde Gros, while the bronze went to Canada’s Laurine Genest.

Martha Bayona continued ratifying the results that she has been achieving at an international level in the last events in which she has participated representing Colombia. Now his intention is to continue adding points and medals in Milton (Canada) in the second valid and arrive in Cali through the front door as he did the previous year.

Colombia achieved its second gold medal through Atlantic sprinter Cristian Ortega, who managed to beat the 19 remaining cyclists from 13 countries. Ortega achieved second place in the qualifying phase by placing 141 thousandths more than the Frenchman Melvin Landerneau who placed 1.00.244.

Already in the final, it was Ortega who made the best time by registering 1.00.325, staying with the gold medal, while the French Landerneau was silver by distancing himself from the Colombian by 375 thousandths and the bronze went to the Spanish Alejandro Martínez who lost 507 thousandths.

And the last medal registered in the table for Colombia was for Valle del Cauca cyclist Kevin Santiago Quintero who won the silver medal in Keirin, a test that was won by Harrie Lavreysen from the Netherlands, while the bronze was awarded to Matthew Richardson from Australia.

At the end of the Cup, France with 5 gold medals was awarded the valid one, leaving the medal table in the first nine places as follows:

Great balance for the Colombian track players, faced with the best in the world represented in world and Olympic champions that make the UCI TISSOT 2022 Nations Cup an elite event worldwide.

The group of cyclists who have participated in this valid in Glasgow, with some changes according to the decisions of the sports directors, will have 17 days to prepare to travel to Milton (Canada) to compete from May 12 to 15, the second valid , competition prior to what will be a dream Cup at the Alcides Nieto Patiño velodrome, where the appointment is from July 7 to 10, with the best track cycling on the planet.

Previous Post
Colombia participates from this Thursday in the first valid of the UCI TISSOT 2022 Nations Cup in Glasgow (Scotland).
Next Post
And now the turn is for Cali